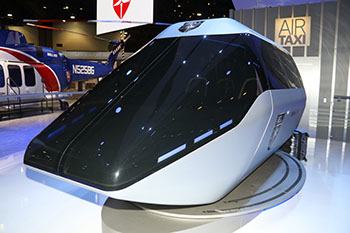 Safran and Bell are partnering on a hybrid electric power system for the latter's urban air taxi eVTOL. Safran has been exploring the potential of hybrid solutions for future propulsion systems for "several years," it said.

Bell is collaborating with Safran to develop a hybrid electric power system for its eVTOL “air taxi” aircraft, the company announced this morning. “Thanks to the long and sustained technology-development strategy conducted within the Safran group, we can now offer Bell our hybrid electric power solutions for their next-generation products that result in improved performance giving more value to our customers,” said Stéphane Cueille, Safran’s senior executive vice president of R&T (research and technology) and innovation.

Safran said it has been exploring the potential of hybrid solutions for future propulsion systems for “several years.” Bell has been coy about the specifics of its eVTOL design, but at this year`s Heli Expo, Scott Drennan, the company`s director of innovation, told AIN that the vehicle would be “hybrid electric.” Drennan said that today`s announcement “is another proof point of our commitment to providing transportation of people and logistics in new, innovative, and more efficient ways.”