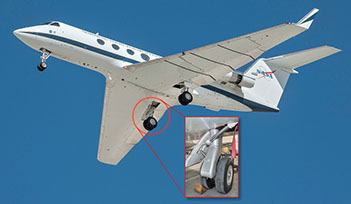 A series of NASA test flights with a Gulfstream GIII testbed last month demonstrated that airframe noise can be reduced by more than 70 percent on landing approach using non-propulsive technologies.

The Acoustic Research Measurement (ARM) flights, conducted at the agency`s Armstrong Flight Research Center in California, tested technologies such as landing gear fairings and theÂ FlexSys morphing-wingÂ flap. For the noise tests, the modified GIII flew at an altitude of 350 feet over a 185-sensor microphone array deployed on the Rogers Dry Lake at Edwards Air Force Base in California.

The experimental landing gear tested by NASA had fairings that are porous along their front, allowing some of the air to flow through the fairing, minimizing drag, while also deflecting some of the airflow around the gear. Meanwhile, the landing gear cavity was treated with a series of chevrons near its leading edge and sound-absorbing foam at the trailing wall, as well as a net stretched across the opening to align airflow more with that of the wing.

To reduce wing flap noise, NASA used the experimental, flexible flap that had previously been flown as part of itsÂ Adaptive Compliant Trailing Edge (ACTE) project. The ACTE flap, built by FlexSys of Ann Arbor, Michigan, is a seamless design that eliminates gaps between the flap and the main body of the wing.

“The number-one public complaint the FAA receives is about aircraft noise,” said Mehdi Khorrami, an aerospace scientist at NASA`s Langley Research Center in Virginia and ARM principal investigator. “NASA`s goal was to reduce aircraft noise substantially to improve the quality of life for communities near airports. We are very confident that with the tested technologies we can substantially reduce total aircraft noise, and that could really make a lot of flights much quieter.”

According to ARM project manager Kevin Weinert, “This airframe noise reduction produced by NASA technology is definitely momentous. While there are obvious potential economic gains for the industry, this benefits the people who live near major airports and have to deal with the noise of aircraft coming in to land. This could greatly reduce the noise impact on these communities.”

NASA’s Acoustic Research Measurement (ARM) flights tested technologies such as landing gear fairings and the FlexSys morphing-wing flap on a Gulfstream GIII testbed. Using an 185-sensor microphone array deployed on the Rogers Dry Lake at Edwards Air Force Base in California, the agency found that airframe noise can be reduced by more than 70 percent on landing approach using these non-propulsive technologies.