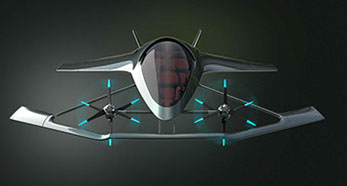 Produced in partnership with Cranfield University, Cranfield Aerospace Solutions and Rolls-Royce, the concept aircraft aims to bring luxury personal transportation to the sky. The Volante Vision Concept is a demonstration of Aston Martin`s design capability. With room for three adults, the concept is a near future study that previews a flying autonomous hybrid-electric vehicle for urban and inter-city air travel, providing fast, efficient and congestion free luxurious travel.

The Volante Vision Concept will take advantage of the latest advances in aerospace, electrification and autonomous technologies, coupled with Aston Martin`s design.

“We need to look at alternative solutions to reduce congestion, cut pollution and improve mobility.Â  Air travel will be a crucial part in the future of transportation, the Volante Vision Concept is the ultimate luxury mobility solution.

“Humans have always spent on average, one hour commuting to and from work. The distance we live from our workplace has been determined by the methods of transportation available.

“The Volante Vision Concept will enable us to travel further with our hourly commute, meaning we are able to live further away from where we work.Â  Cities will grow, and towns that are today too far away from cities to be commutable will become suburban.”

Cranfield Aerospace Solutions (CAeS) CEO Paul Hutton said, “The introduction of autonomous and electric propulsion technologies into new aircraft designs is both inevitable and challenging, and as the UK`s leading aircraft design and production SME we are excited to be playing this key role in the Volante Vision Concept and so to be at the vanguard of this revolution in aerospace.”