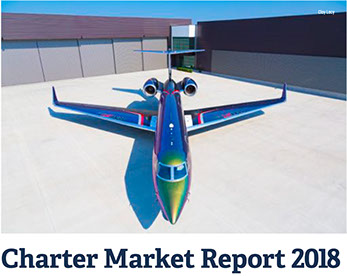 Strong growth in charter flight activity outpaced gains in Part 91 and nominally advancing fractional operations in the U.S. over the past year.

Global charter ops also increased as a surge of consolidation among major providers redefined the marketspace. Technology was the driving and enabling force behind much of the industry news, and a primary focus among providers seeking to maximize efficiencies and opportunitiesâ€”that is, virtually all of them.

Part 135 flight activity grew 4.5 percent during the first half of 2018 compared with 2017, to just over 550,000 flights, levels not seen for a decade, while Part 91 activity rose 1.3 percent and the fractional fleet gained 0.4 percent, according to Argus International.

“I think we are back where we were pre-recession,” said Joe Moeggenberg, Argus president and CEO. “The good news is business is very good. The bad news is the industry is experiencing some issues with lift and having a hard time finding newer aircraft with all the amenities to meet the demand. That`s exactly where we were in the 2008-09 time frame.”

“The top operators aren`t adding a lot of new airplanes, but they`re running a lot more efficiently,” said Moeggenberg. “Everybody has figured out how to fill up a lot of these empty legs. Operators have done a really good job of optimizing their fleets.”

Though Part 135 activity continues to see positive growth, the rate has slowed recently, posting in June the first year-over-year (YOY) decline in activity in 25 months.

Gama Aviation, which operates Wheels Up`s Citation Excel/XLS and King Air 350i aircraft, in addition to its managed fleet, retained the top spot in charter flight time with 72,885 flight hours. The 18 percent rise over the prior year was in line with the 18 percent growth in its charter fleet from 99 to 117 aircraft.

proximoFAA to Pilots: Keep Transponders On While Taxiing