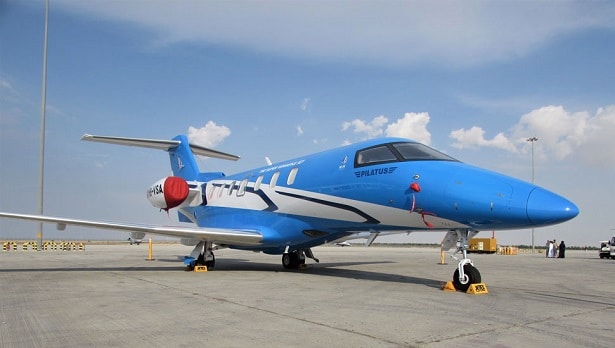 In its latest industry review, released on 15 November, the General Aviation Manufacturers Association (GAMA) records deliveries of 516 business jets between 1 January and 30 September, compared with 447 units in the same period last year. The previous nine-month delivery record for the segment was in 2009, when 616 business jets shipments were logged, GAMA data shows.

Key to the latest performance is the production ramp-up of the PC-24 programme for Pilatus. The superlight twin entered service in February 2018 as the Swiss airframer’s first business jet, and nine examples had been shipped by the end of that year’s third quarter.

PC-24 output for the first nine months of 2019 was 27 aircraft, GAMA data shows, and Pilatus expects to deliver a total of 40 this year.

Cirrus Aircraft – another company making its debut in the jet market – recorded a 26% rise in deliveries of its SF50 Vision Jet over the period, from 41 to 52 units. With a backlog for the single-engined type in excess of 500 aircraft, the Duluth, Minnesota-based airframer is preparing to ship 80 Vision Jets in 2019, before reaching a full-rate production output of 100 aircraft per year in 2020.

Embraer’s output rose over the first nine months from 55 to 63 aircraft, GAMA data shows, with the increase due entirely to the introduction of the Praetor 600. The super-midsize Legacy 500 derivative was launched in 2018 alongside its midsize stablemate, the Legacy 450-based Praetor 500. The latter model secured Brazilian certification on 13 August and service entry is imminent. Although performance across the rest of Embraer’s product line was flat over the first nine months of the year, the Phenom 300 retained its title as the most-delivered business aircraft in the light-jet category, with 35 examples shipped during the period.

Rival Textron Aviation delivered 135 Cessna Citation-series business jets between January and September – 21 more than the same period last year. The strongest performers were the Latitude and XLS+, with shipments climbing from 37 to 42 and 12 to 15 units respectively. GAMA’s report also lists the final delivery in the first quarter of the Citation X+, after a 23-year production run. The Mach 0.935-capable twin has been replaced in the company’s product line by the slower but larger-cabin Longitude, for which Textron has a substantial order backlog. Deliveries of the flagship super-midsize twin began in October and will be recorded in Textron’s 2019 output.

Strong demand for the clean-sheet, super-large cabin G500 and G600 helped to boost Gulfstream’s output from 79 aircraft in the first nine months of 2018 to 103 over the same period this year. The airframer has delivered around 30 G500s since the type entered service in September 2018. The model was joined in August by the longer-range G600, of which Gulfstream had delivered four examples by 30 September. The company is now accelerating production of both types to keep pace with demand.

Bombardier is also boosting production of the high-end Global 7500, for which it has accrued a backlog of more than 100 aircraft. The ultra-long-range flagship entered service in December 2018, and while only nine units were recorded as shipped between January and September, Bombardier plans to deliver more than 15 examples by the end of this year.

The GE Aviation Passport-powered Global 7500 was the only strong performer in Bombardier’s line-up between January and September, GAMA data shows. Shipments of the Challenger 650/350 fell by 10, to 48 aircraft, while Global 5000/6000 output slid from 29 to 27 and Learjet 70/75 deliveries remained at nine aircraft. Bombardier expects this lacklustre performance to be short-lived, however, thanks to the introduction of a wave of new products with robust order backlogs. These include the latest Global family members, the 5500 and 6500. The pair were launched in May 2018 as longer-range versions of the Global 5000 and 6000, featuring all-new Rolls-Royce Pearl 15 engines, revamped interiors and new wings designed by Mitsubishi Heavy Industries. The Global 6500 entered service in October, while deliveries of the 5500 are expected to begin early next year.

They will be joined in 2020 by the Learjet Liberty 75 – a revamped, repositioned and rebranded Learjet 75, launched in June to address declining sales of the legacy twin in the highly competitive light-jet sector.

Dassault expects its in-development, super-wide-cabin 6X to shake-up the top end of the business jet market and boost Falcon output when it enters service in 2022. Although GAMA’s report does not include Falcon shipments – the French airframer releases delivery numbers at six-monthly intervals – Cirium fleets data records a modest hike in deliveries between January and September, from 21 to 24 Falcons. The large-cabin 2000LXS was the strongest performer, with deliveries climbing from four to 10 aircraft. By contrast, shipments of the 8X tri-jet almost halved over the same period, from 11 to six, reflecting fierce competition in the ultra-long-range segment.