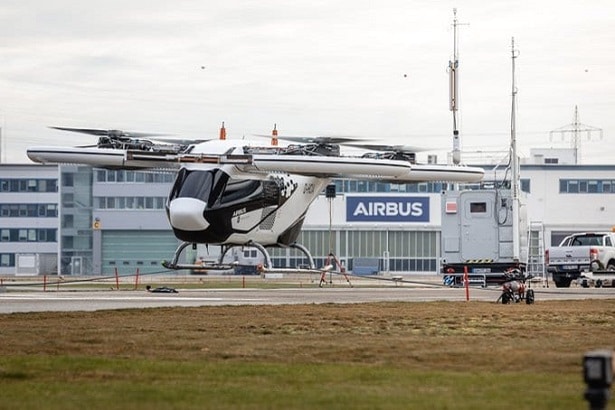 Airbus` all-electric, four-seat multicopter demonstrator, CityAirbus, made its first untethered flight in December in DonauwÃ¶rth, Germany, at the company`s competence center for military air systems, according to Airbus.

Housed under Airbus Helicopters, the CityAirbus project â€” as well as the Vahana unmanned demonstrator, which completed flight testing last year â€” is part of Airbus` efforts to explore and understand the fundamental technologies behind electric aircraft and the urban air mobility market, including distributed electric propulsion and autonomous flight.

The CityAirbus demonstrator is intended to be remotely piloted, according to Airbus` website, or flown autonomously for up to 15 minutes, though that capability hasn`t been added to the aircraft yet, according to the company.

As a multicopter concept somewhat similar to Volocopter`s VoloCity, CityAirbus likely will not be as efficient in forward flight as many other electric vertical takeoff and landing (eVTOL) concepts, such as two unveiled at the 2020 Consumer Electronics Show: Bell`s Nexus 4EX and Hyundai`s S-A1, both of which are part of Uber`s Elevate ecosystem.

Mark Moore, Uber`s director of aviation engineering, believes that maximizing performance in cruise while minimizing aircraft complexity will be critical to successful eVTOLs designed for UAM missions. A slide shown by Uber at the 2019 Elevate Summit, charting complexity against mission performance (cruise speed and lift-to-drag ratio), marked CityAirbus in the lower-left corner: low complexity â€” with no tilting rotors or other vectored thrust technology â€” but also low performance.

As a demonstrator program, the CityAirbus project isn`t likely to enter production, and a subsequent eVTOL produced by Airbus may look nothing like it. Airbus did not respond to questions on why it chose to pursue a multicopter design for this project.