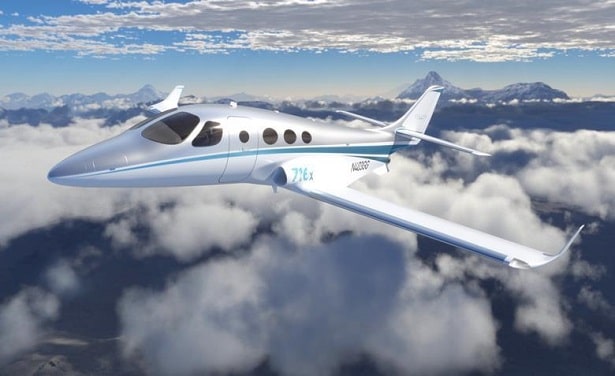 Stratos Aircraft has completed load testing on its 716 very light jet (VLJ) and is now assembling the first prototype of the single-engined six-seater, which it hopes to fly in the second half of the year.

â€œWe are making good progress,â€ says Stratos chief technology officer Carsten Sundin. â€œ99% of the parts for the test aircraft are now built and fuselage and wing mating is now under way at our base in Redmond [Oregon].â€

The 716 was launched in July 2018 as a longer and wider version of the 714, which it replaces. Stratos has continued flying the proof-of-concept 714 to gather feedback for the current model, and has logged over 330h on the article to date.

Sundin says the company is â€œtaking its timeâ€ with the 716, so it can create an aircraft that is â€œproblem freeâ€ from the start.

Initiatives include switching to lightweight materials and parts to boost payload and range, and developing a method to co-cure the VLJâ€™s pressure vessel, creating a single component that requires no secondary bonding. Sundin says the joining method has the advantage of â€œeliminating most critical joints, and making the structure stronger, safer and more resilientâ€.

â€œWe will begin high-speed taxi testing in the next quarter and when the aircraft is absolutely ready it will make its first flight, but this scheduling depends on how smooth the preparation goes,â€ says Sundin.

Once flight testing is under way, Stratos will open the 716 orderbook.

The first examples will be produced as kit aircraft and branded as the 716X.

This approach, Sundin says, will allow the company to â€œrefineâ€ the product before it embarks on the US Federal Aviation Administration FAR Part 23 type certification campaign.

â€œWe donâ€™t have a specific number of 716Xs in mind,â€ says Sundin, â€œbut it will be a small volume, and we will work with the owners to gather feedback on the aircraftâ€™s performance.â€

Stratos hopes this approach will lower the development costs for the 716 and help attract investors who will assist in bringing this certificated version to market.

Stratos has sufficient funds to support 716X development, and to continue to make â€œincremental improvementsâ€ to the 716 design, Sundin says, â€œbut the capital required for the Part 23 version will be greater by an order of magnitude,â€ he cautions.

All options are on the table for â€œinvestment scenariosâ€, Sundin continues, â€œprovided they are adequate to bringing the 716 to market and to build the company and product line for years to comeâ€.

The company is also expanding its manufacturing capability in Redmond, which currently houses only a small amount of tooling. â€œWe are going to build a full manufacturing facility which will allow us to increase aircraft volume as demand increases,â€ says Sundin. A â€œrealistic production forecastâ€ is for between 30 and 50 716s per year, he adds.