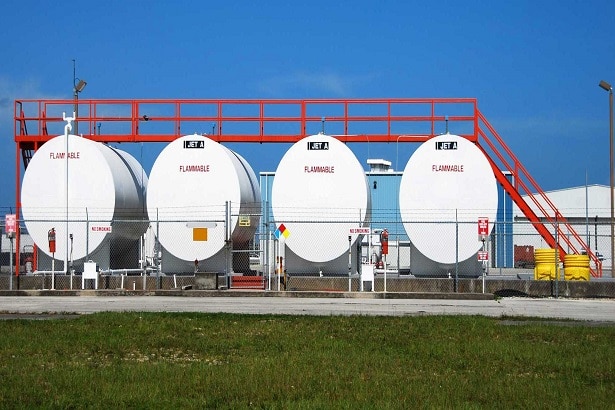 As commercial airlines continue to cancel flights as a result of the Covid-19 pandemic, the situation has resulted in the lowest demand for Jet-A since the aftermath of the 9/11 terror attacks in 2001. The Airports Council International (ACI) recently noted that it predicts close to 38.1 percent of global passenger traffic will be lost in 2020, equating to 3.6 billion passengers. That curtailing of global flights has led to an oversupply in the amount of available Jet-A.

“Airline fuel consumption prior to Covid-19 in the U.S. was running about 1.7 million barrels per day (b/d),” said Ben Brockwell, co-founder and executive director of strategic content at the market analyst Oil Price Information Service (OPIS). “That is now down to 1.3 million b/d, and even that number is high because it reflects barrels being produced and going into storage and not into aircraft for consumption.”

According to the Department of Energy, jet fuel consumption in March was down 16.4 percent and year-over-year is showing a decline of nearly 8 percent. As the epidemic continues to grow, those numbers are expected to rise even further.

“IHS Markit, our parent company, estimates that U.S. jet fuel demand in April will fall to 607,000 b/d compared to 1.75 million b/d the same time last year,” Brockwell told AIN. “That is a huge drop, and the country is running out of space to store fuel.” Some assessments say less than 20 percent of the land-based fuel storage remains empty.

“Producers have to discount the fuel in order to incentivize someone to take delivery today on the spot market and store it, as opposed to waiting to buy it in the future when demand picks up,” said Sincock. When asked if this situation has resulted in a “glut” of aviation fuel, he replied, “to some degree, yes, because the supply chain can’t be turned off and on overnight. You have production ramped up for a certain level of usage, and then when demand is cut in such a short amount of time, of course, there will be an oversupply in the market.”

For those still flying, the situation has resulted in a hint of a silver lining at the fuel pump. “Airline fuel demand is down and supply is up,” said Brockwell, “a basic equation for prices being as cheap as they have been in two decades.”

Just as drivers have encountered the lowest prices in years at the gas station, that translates to the business aviation sector as well. “We should see significantly lower fuel prices at the pump,” noted Sincock. He referred to the negotiations with Saudi Arabia and Russia to decrease crude oil output. “But even if that happens, we don’t expect fuel prices to be at the levels we saw at the beginning of the year any time soon.” With the demand reduction in the marketplace between flying and driving being in excess of two-thirds of the production coming out of refineries, Avfuel expects prices to remain depressed.

For the FBO industry, while cargo and humanitarian flights continue, aside from an early spate of aircraft and personnel repositioning back to their home bases, there has been a corresponding drop in fuel sales, according to Avfuel, based on feedback from its more than 650 network members.

“We are so proud of this industry and how many FBOs and flight operators have remained open to service as part of the critical infrastructure helping the fight against Covid-19,” said Joel Hirst, the Ann Arbor, Mich.-based company’s vice president of sales.

To support them, the fuel provider has waived the initial subscription fee for its FAA-approved Part 139 Line Fuel Safety and Supervisory courses through the end of June, giving all network customers free access to all of the Avfuel Training System content for a year upon new signup.

Avfuel has been in constant communication with its network, gathering the latest resources on health and safety, the CARES Act, training, operational guides, marketing, and other topics on its website. Hirst said the Avplan trip support division is available 24/7 to answer customer questions, including Covid-19 updates and trip feasibility at no cost, and he also said Avfuel will be altering the tier requirements for its Avtrip customer loyalty program to account for the current economic environment.