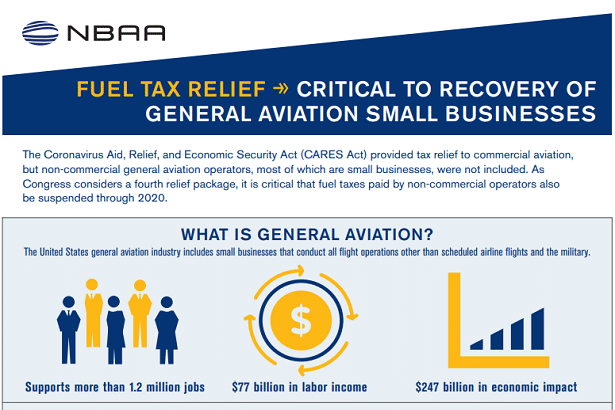 Temporary fuel tax relief would provide a valuable incentive to preserve jobs at thousands of GA small businesses and help bolster traffic to small community airports, which have seen their operations and fuel sales decline by more than 50 percent across the country as GA flying has dropped by nearly 60 percent, noted NBAA President and CEO Ed Bolen.

“General aviation is a vital part of our nation’s aviation ecosystem,” he continued. “In addition to supporting flights at smaller airports around our country, temporary suspension of federal excise taxes for GA operators to preserve jobs, thus ensuring that our industry is ready and able to promptly resume flying once this crisis passes.”

In the letter sent April 15 to U.S. House and Senate leadership, the associations also noted the important role GA and non-commercial business aviation pilots have played throughout the COVID-19 pandemic in providing critical lift for medical supplies, personnel and patients.

“In addition to connecting small communities without airline service, general aviation has a proven track record of providing humanitarian assistance,” the letter reads. “Recently, our industry facilitated the delivery of one million protective face masks and more than half a million COVID-19 test kits from China. Other operators are using aircraft to transport medical supplies around New York and assist with the logistics of moving medical equipment around the world.”

View the April 15 letter from NBAA and five other general aviation groups to Congress. (PDF)

The association urges members to use NBAA’s Contact Congress resource to contact their elected officials and explain that fuel tax relief will help general aviation businesses in their recovery.